THE REAL REASON AMERICA IS THE PRISON CAPITAL OF THE WORLD

his may be an uncomfortable read for some, but let us have a conversation about the real culprit behind mass incarceration in America. It is not, as popularly believed to be, the result of the federal government’s war on drugs. Rather, America has become the prison capital of the world because of lengthy prison sentences imposed on violent offenders. And if the goal is to decrease incarceration, then a tough conversation needs to be had about how long violent offenders are held behind bars.

And although these efforts cannot go unappreciated, it leaves out a vast majority of the prison population. And if true reform in the criminal justice system is to be achieved, violent offenders cannot be ignored in these efforts. I will introduce you to data from the U.S. Department of Justice to illustrate this point, but before I do, I will like to shed light on often overlooked facts about violent offenders.

Studies shows that people convicted of violent offenses are less likely to be repeat offenders than their counterparts; drug and property offenders. Meaning, a person convicted of a violent offense who spends 20 years in prison is less likely to re-offend and end up back in the system than the person who spends two years in prison for drug-related charges. This is because, as research shows, people tend to age out of crime. So while the propensity to commit a violent offense may peak in the late teens, the desire to so dwindles down with age.

And if you are still offended by the thought of shortening the prison sentence for a violent offender, understand that about 90-95% of all criminal cases are settled by plea deals. A person who pleads guilty to a low-level drug or property offense is likely a violent offender who pled guilty to a lesser included charge to save the state the cost of a trial. So while people may sleep better at night thinking the current prison reform efforts are targeted at only the nonviolent offenders, in actuality they may inadvertently aid in the release, or shortened sentence for the type of violent offenders, likely to re-offend.

The Federal Governments’ “War on Drugs” Only Impacts about 5-6% of The Prison Population.

It is a popularly held belief that the federal government’s war on drugs during the 1970s and the ’80s is the cause of mass incarceration in America. However, the numbers do not back up this particular assertion.

And here is why: 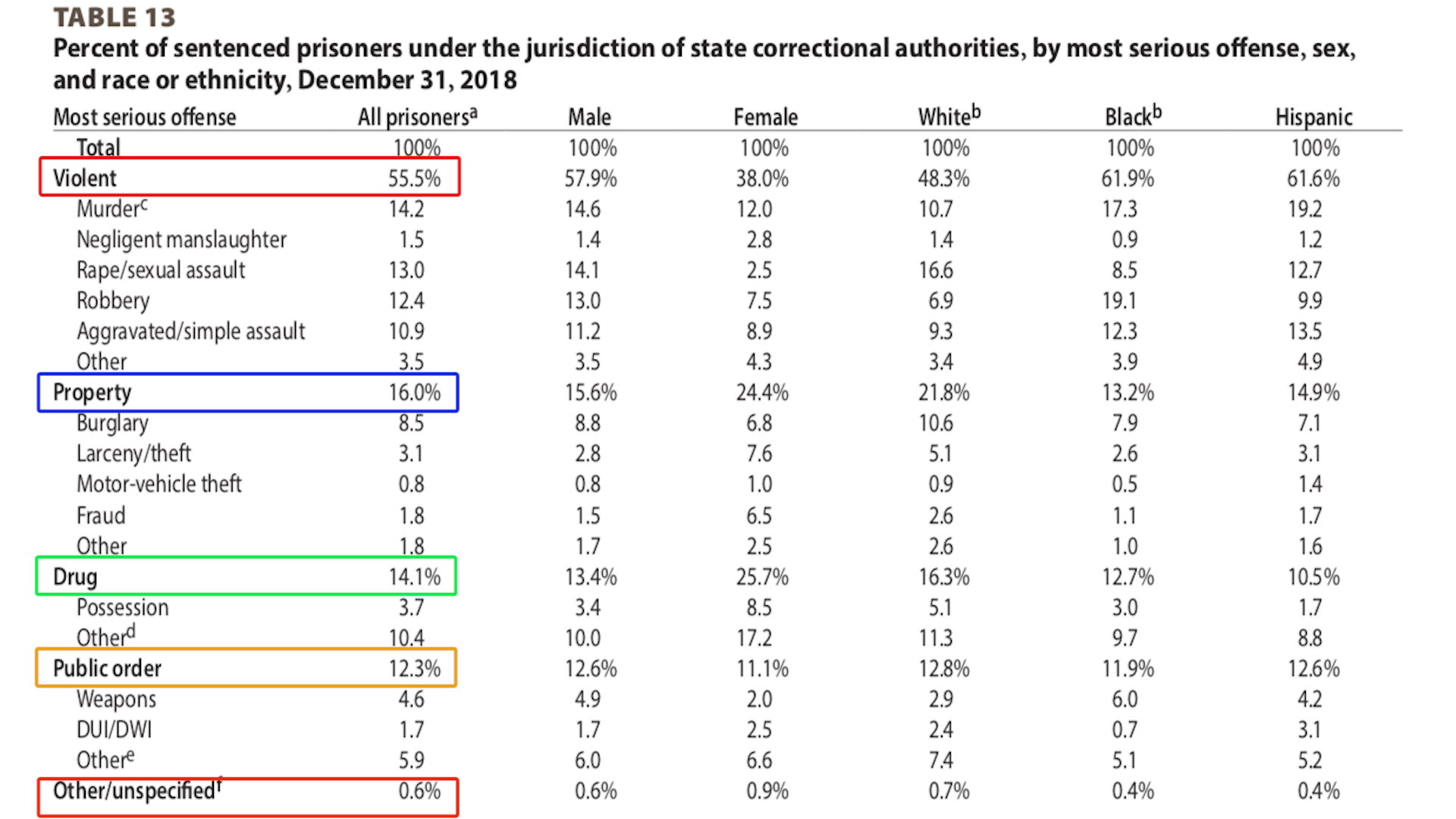 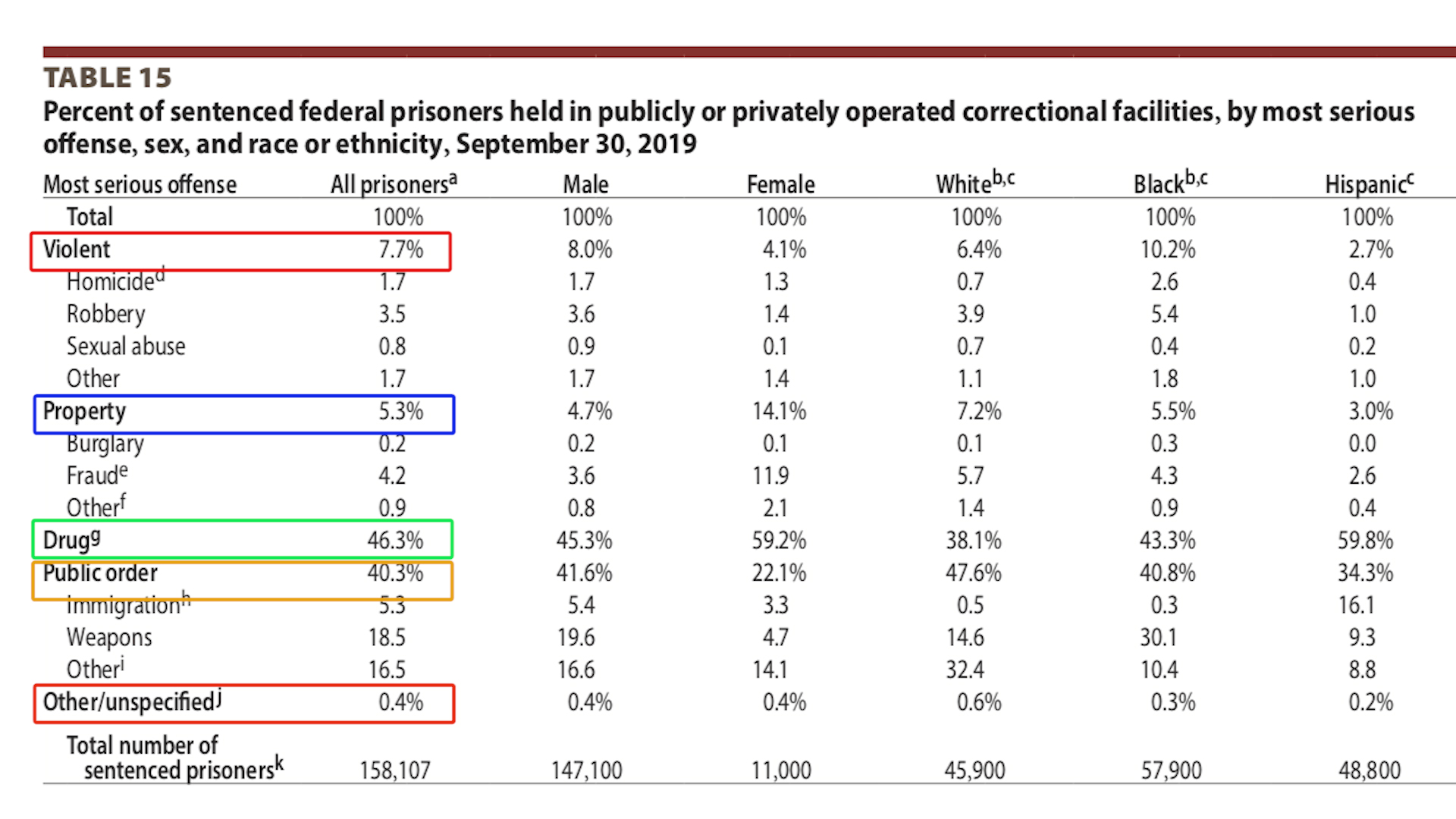 Even in the unlikely scenario where all the prisoners held by the federal government on drug-related charges are freed, only 5-6% of the prison population will be affected.

Violent Offenders Make Up The Majority Of The Prison Population 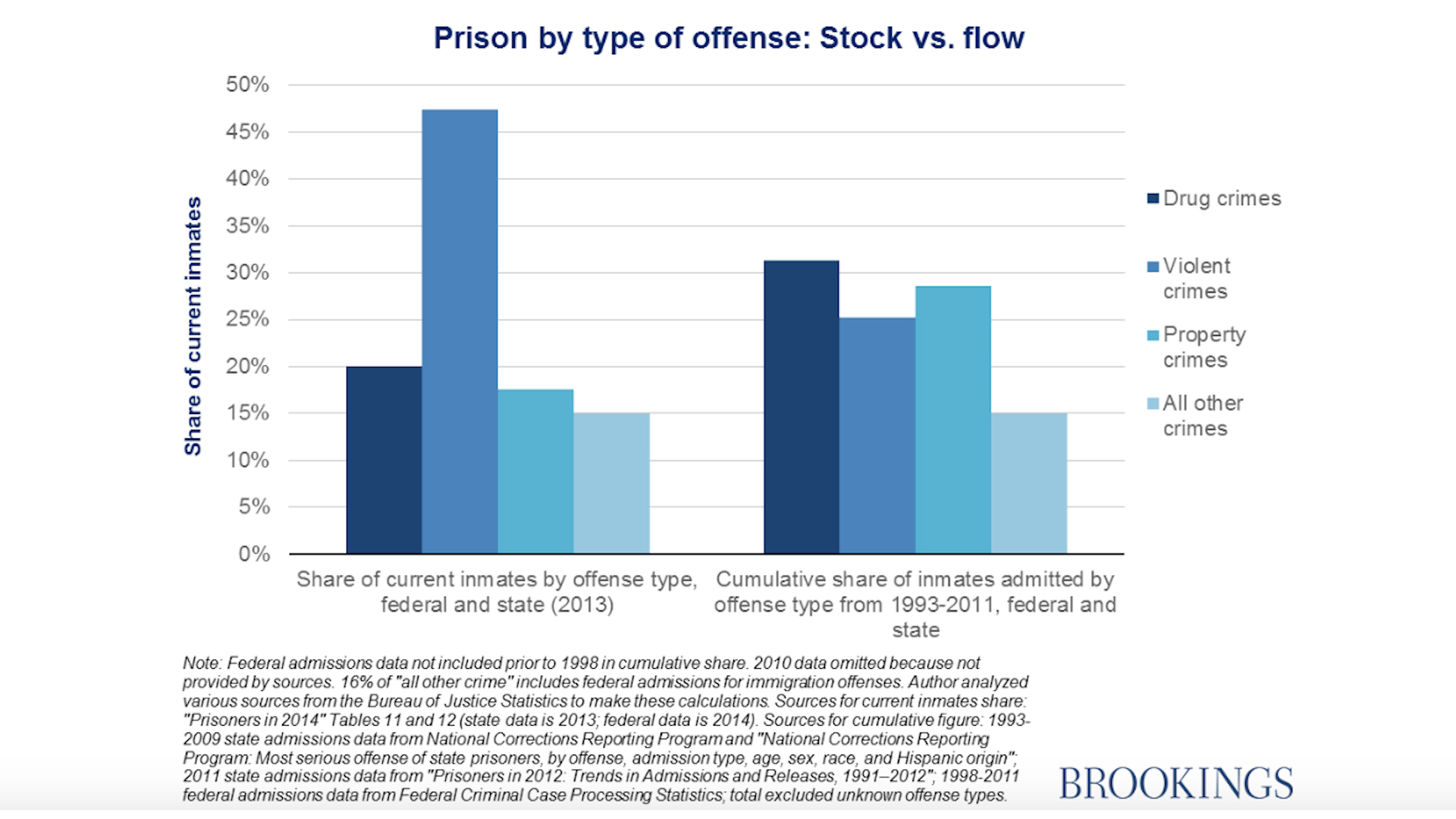 Prison reform efforts from the last decade have helped decrease the number of incarcerated people in America. Since 2009, the imprisonment rate for US residence has dropped by 17%. However, this drop largely impacts nonviolent offenders. And this could be because prison reform during this period has mostly focused on this class of offenders. For example, from the most recent data, the percentage change in a release from 2018 to 2019  was 7.4% for the federal government, while the change was -1.8% for the state. See The Table Below: 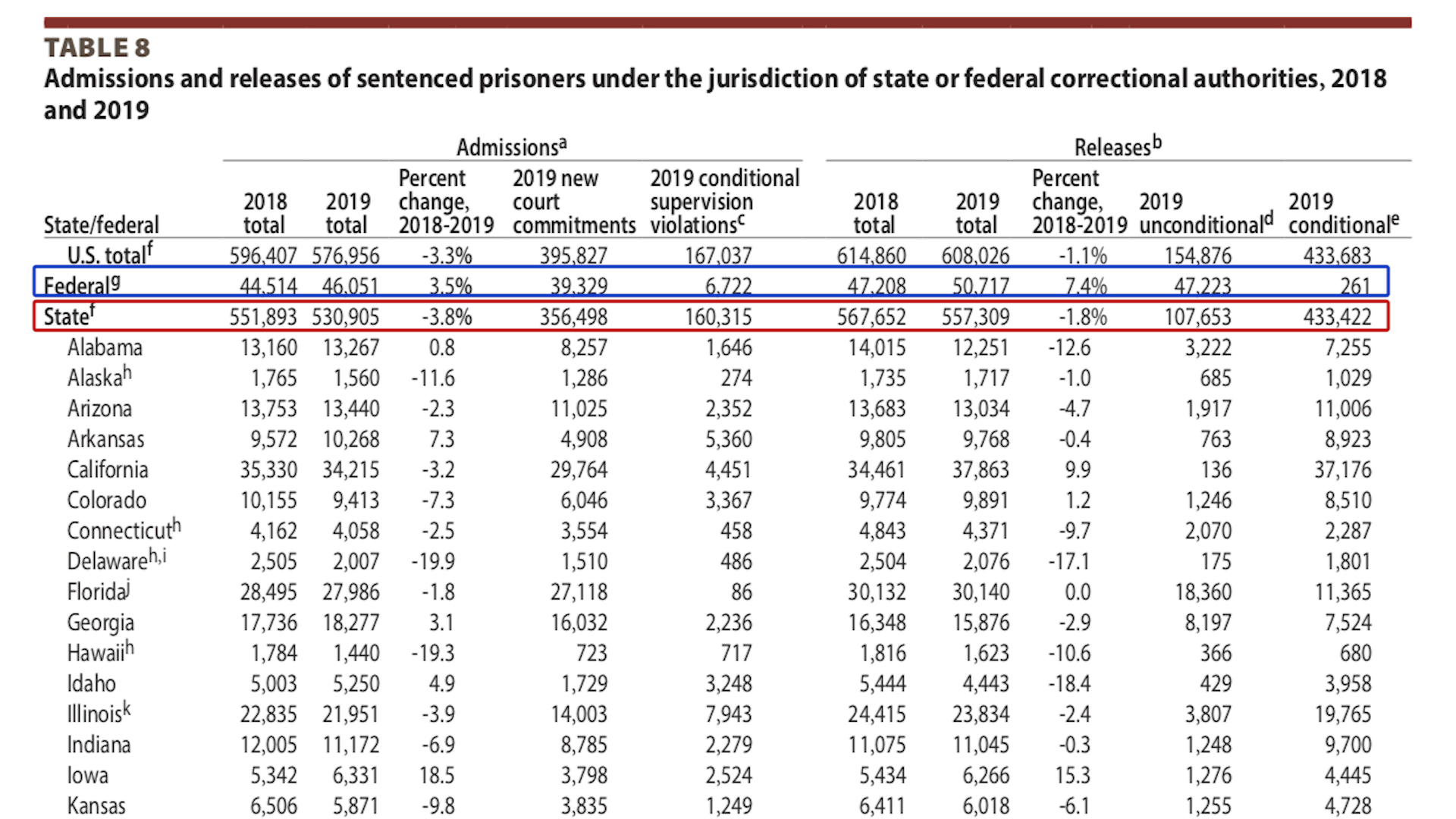 However, as John Pfaff, the author of Locked In The True Causes of Mass Incarceration and How to Achieve Real Reform warns, unless attention is paid to the real cause of mass incarceration—violent offenders, the decrease in a prison population that has been achieved in the past decade will not continue, at least not at the rate it has been in the last decade.

Not All People Labeled Violent Offenders Are Actually Violent People.

Some people are labeled violent offenders in title only. An example of such a persons is Rebecca Forward, whose story I introduced you to earlier. Rebecca pled guilty to first-degree murder in 2002. But Rebecca neither intended to nor actually killed anyone.

She was charged under a theory of law known as the felony-murder rule. She was tricked into a robbery by her boyfriend. In fact, she was not aware that the robbery was happening when it was actually happening. Her boyfriend brought a friend along for the robbery who ended up killing the victim. Because prosecutors wrongfully found that Rebecca played a role in the robbery, the crimes of her boyfriend, and his accomplice was imputed onto her. So although Rebecca is not actually a violent person, she is classified in the group of violent offenders. There are other nonviolent persons like Rebecca who were prosecuted for violent offenses under other forms of legal theories like the accomplice liability theory.

The vast majority of people support criminal justice reform. And the efforts to reform the justice system has come a long way since 2009. However, to ensure a continued decline in the number of people who are incarcerated, the real root of the problem of mass incarceration should not be ignored. And the cause of this problem is lengthy prison sentences for violent offenders.

[1] Here are the numbers from previous years:

[2] This is the most recent data available